Since my last post on somnambulism and whether it is necessary, I decided to write on one of the more interesting uses of hypnosis, which is to have them open their eyes!

“Can you hypnotize someone with their eyes open?”

Yes, absolutely! Just look at a stage hypnosis show. The people are up on stage, with their eyes open, deeply hypnotized.

We can also similar things with clinical work. We have the person open their eyes, deeply hypnotized.

The Benefits of Eyes-Open Hypnosis

Having them open their eyes within somnambulism has primarily the benefit of fractionating the state. When we do fractionation within the Elman induction, we are have the person open and close their eye lids three times.

They are not actually “emerging” out of hypnosis during those three times, rather they are bringing themselves deeper into the state.

If you are a hypnotist who has a skill with fractionation, you may also apply this skill in other ways, such as anchoring that state with your vocal tone and then purposefully doing a break state. Remember, everything you do is hypnosis.

A second benefit to having them open the eyes is that it can act as a powerful setup for having the person ratify/test that they are indeed hypnotized. Or, indeed, to ratify just about anything at all.

How To Do It: Step by Step

The steps of getting into this state are first to bring them into a natural state of hypnosis with their eyelids closed. Verify and test for somnambulism, making sure that you have them in the state. Then you say something similar to this:

“In a moment, Clarice, I’m going to count slowly from 1 to 3… When I count the number 3, you’ll open your eyelids slowly, remaining in this hypnotic state, and we’re going to have a hypnotic conversation. 1, feeling warm and comfortable, 2, now the eyelids start to blink open, and 3, feeling great…”

It’s really as simple as that. At that point I might condition the state further like this:

Taylor: “Hey how are you doing? Feels great doesn’t it.” (descending tonal inflection)
Clarice: “Yeah it feels good”
Taylor: “Did you notice how every breath you were exhaling just kept taking you right on down?”
Clarice: “Mmmhmm”
Taylor: “And I wondered, if you were aware, of how deeply you were relaxing, as I continued to talk to you, and you continued to breathe…”

Now for those of you who are trained in such techniques, you’ll recognize that I am using Ericksonian language patterns, and tons of presuppositions. That’s what you want to do. Use strong pacing statements with presupposed suggestions.

From this point, once you have compounded the suggestions, it’s time to re-hypnotize the person. Here is how I set it up:

And at this point I would do an instant induction. Proceed immediately to deepening (as explained in my video here) and then compound and reinforce the suggestions even more.

This works, really well. Go out and use it — and if you have any suggestions or ideas that you pick up through your own practice, tell us in the comments below.

Engage the imagination, Change the belief.

Here is a belief change process that is quite cool that I came up with today. It hasn’t been coded yet into a “ready set and go” technique but for the intermediate to advanced hypnotists and NLPers out there, you will find a lot of great things to use in this. This is best done when you have already elicited the limiting belief, and the resourceful belief that they want to replace it with. Enjoy. 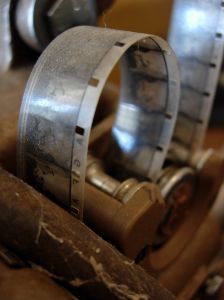 The setting is that your beliefs or thoughts are like a transparency that’s been put on a projector in a room… so that when you flip the projector on, it appears to light up kind of big on the screen, right? [Get them to agree, this is leading] It SEEMS real, right? [This is distancing them from it]

But you know that in reality that someone wrote those words on there, or put those pictures up there, and you could actually just erase them and start over. So imagine your limiting beliefs that you want to change being up there, and you know that since they are on a projector, that they have a bit of transparency to them, they are just light being projected.

Now these beliefs, of course, are very old, and dusty, aren’t they. [Tag question] Maybe they have fingerprints on them, or maybe the pictures are faded, or the words are partially erased from being written in that whiteboard marker that wipes off so easily.

And you know that at any time you could flip on the lights and that the projector would not be the only thing you would be focused on, and if the projector turns off, then you become aware of the rest of the room. And so up until now you have had those beliefs [Notice the changing of tenses here to put the beliefs in the past] up there, and they were up there shining pretty brightly and kind of taking over your attention … but you know at any time you can go ahead and flip on the lights in the classroom [Command], and realize that you are still learning.

Note: this is a metaphorical shift; we started off with a projector, then I added in that it’s in a room, then a classroom.

And if before those old beliefs start to fade away the lights turn on [Command and leading language], then you can grab the old transparency of those old beliefs and spray it with some solution to remove all the dust and grime, and maybe some of the old beliefs start to smudge as well, or maybe they wipe off all at once. Then find the trashcan and throw away that transparency, and take a new one out of the pack that is completely clean and free of smudges.

Now if you take the time to think about what would be better things to believe, notice if it is something where the better images immediately pop into place on the projector and you believe it just as strongly, or if you need to first dim the lights before the new images come up and they start to entrance you. [Double Bind]

So make sure that the new beliefs are just the way that you want them, and then you can dim the lights and start to play the pictures on the projector. Maybe they are moving pictures and you start to dream about how nice it is to believe these things, having had made these changes [Hypnosis Language Patterns]

If you wanted to you could easily make this into a more action-step type of process. The way I discovered this was by talking one of my clients through a changework process in which they had wanted to change some beliefs. They wanted to use a submodality swish, but they didn’t seem to be having much luck with it, so I came up with a new metaphor: the transparency on the projector.

There are lots of other things you can play with in this. I purposefully picked a transparency, because one of the visual submodality shifts is whether or not an image is solid or transparent. So if the client wasn’t quite getting it, I could easily go back to making the old beliefs transparent. And if I wanted to concrete the new beliefs, I would have them go back to being completely focused on the projection of the transparency, and have them step into it, making it real and solid.

By changing the context of what is happening, I make a shift between “old beliefs” (transparent / projector) and “new beliefs” (real and solid) … there’s also some great stuff in there about how they are always in a classroom, which means they are always learning, and so if they are learning then they can’t possibly have old beliefs (which were just written on a transparency with magic marker) to be somehow “stuck” there… instead we can spray solution on it, erase the old beliefs, smudge them, and do whatever to do them, because they are only a transparency…

Get the structure? 🙂 I really like this one. Try it out and leave a comment to let me know how well it worked for you!

About this Hypnosis Blog


The Tranced Out hypnosis blog is edited by Taylor Sherman, and is meant to provide you with knowledge about Hypnosis, NLP, and Personal Development.

Subjects include how to do self hypnosis, language patterns, neuro-linguistic psychology, instant and rapid inductions, and more!

We'll show you the powerful hypnosis insights that you only get from practice. For more information, check out the About Us page.